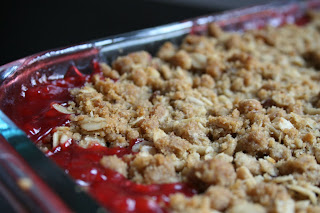 Strawberry and Rhubarb. A common pairing, seemingly age-old even, but not for me. Like so many other treats steeped in Americana, those of the strawberry-rhubarb variety never made it inside my home growing up. Our sandwiches were made with Oroweat Masters' Best seeded and nutty breads and always made a bee-line for the soda fountain when we stopped in to the family restaurant because we weren't allowed to keep it in the home. Instead, my mother encouraged the consumption of a new-fangled just-add-water-to-powder concoction at the time - Barleygreen, or a fermenting, yeasty drink whose curds would be recycled for the week until I don't even know when. On very rare occasions, Thrity Butter Pecan ice cream, Sara Lee cheesecake, or a Twinkie would appear, but as far as goods from an actual bakery went, unless it was a mango mousse cake from Sheng Kee (just sweet enough), I knew nothing of it.

Along comes my friend, or, rather, along goes my friend. My dear friend Liz decided a couple years ago to leave the sunny skies and congested streets of Los Angeles for green pastures (greener pastures being Sacramento), and as a farewell gesture, made her one of her favorites -- strawberry rhubarb pie. It was my first attempt with this flavor combination, not quite sure what it should taste like, and I never got to know it any better as off she went with the lattice-topped thing of beauty. Digging in to desserts before gifting them just isn't my thing, though time and time again, I wish it was.

This week's Tuesdays With Dorie pick by Sarah of teapots and cake stands could be considered my first official foray into strawberry-rhubarb desserts (because we all wonder, if a tree falls in the woods and no one is there, does it make a sound?), and having tasted it, I can vouch that it really did happen. And I loved it. 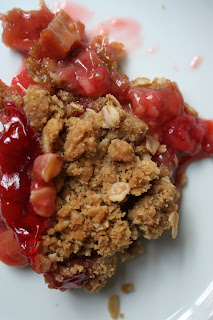 Crisps are magical things to begin with, and that this was a double crisp?? I'm going to have to change all my crisp recipes into double crisps now, because as much as I love naturally sweet, seasonal fruit, the oat-flour-butter-nut-spice amalgamation is my favorite part of a crisp, and I know I'm not alone. A top and bottom layer of crisp?! This may just be better than pie!! The crystallized ginger also added an unexpected perk that would go well with plums, pears, peach -- it has to be my new favorite dessert addition (and Dorie's trick of steaming aged, hardened ginger over simmering water is genius)!!

I'll see my incomparably hilarious, wonderfully self-deprecating, and now, amazingly happy friend soon, and when I do, this is the winner I'll be toting.