Second time not such a charm

Argh! First big failure since my overflowing Billy's Vanilla Cupcakes. And this was for something I’ve made before, and was so simple! Chocolate Idiot Cake (also known as a better Flourless Chocolate Cake than they have at Sweet Lady Jane, if that even means anything anymore). C’mon. The name says it all. Even an idiot can make it!

Well I wouldn’t want to discourage anyone from making this, because it really is the simplest of simple desserts featuring only 4 ingredients that even people who don’t care for flourless chocolate cake enjoy, and I know that my error lies in the unfortunate seeping of water into my springform pan. So you hear that kids? Double – or even triple – wrap your foil around the bottom of the pan to make sure water does not mix with your possibly not-air-tight springform pan. It's not pudding, it's cake! Sigh. Number two is in the oven right now.

Okay. So water got into the pan the second time too. What is going on? Why was my first attempt so successful, and subsequent tries have been failures? The recipient of the cake was actually quite fanatical about this cake ("I don't want to eat another flourless chocolate cake again, unless it's this one") so perhaps it wasn't a complete failure, but when you have a certain idea of how something is supposed to turn out, yielding a different result is simply disheartening. How skilled is one as a baker if they cannot produce a consistent product?
1 comment: 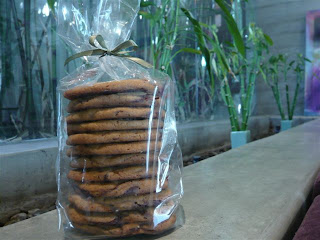 I take pride in disseminating information that I think the recipient will find interesting or useful. I think sometimes people mistake it as favoritism – special treatment with a wink – and maybe it is, to an extent (I mean, I don’t bother with people I don’t like), but the truth of the matter is I just want to be helpful. I have a very reliable circle of friends and family who do the same for me, so when I was linked to David Leite’s article in the New York Times for the best-ever chocolate chip cookies a couple Wednesdays ago, I immediately perked up and mentally shelved this recipe for near-future use. (I would have found this article on my own later that day, but there’s a certain satisfaction when someone knows you well enough to recognize information that you will find fascinating.) I’ve enjoyed the City Bakery chocolate chip cookie on both coasts, witnessed the glory of a Levain Bakery cookie on Throwdown with Bobby Flay, and became enlightened about the powers of a little extra salt in or on a cookie from Dorie Greenspan with those addictive little Korovas, so a recipe taking bits and pieces from all those solid creations was completely enticing. What occasion can I make these for??? Lucky for him (and me), the friend that sent me the link also had the birthday coming up soonest so what better way to salute such a generous friend than with such amazing-sounding treats?
I decided I would try to follow the recipe to a T, if just once, to accurately evaluate the recipe. I bought the bread flour and knew where to get the feves, but unfortunately, I didn’t have time to get them. Time was counting down as I had to send the cookies by a certain day in order for the cookies not to arrive ridiculously late so I ended up making the dough early enough for it to rest for 36 hours. After a looooong internal dilemma about whether or not to just chop up good bittersweet chocolate, I said “NO! I am going to do this right!” and proceeded to call the stores in West Hollywood that could potentially carry couverture quality chocolate. Bristol Farms only had White and Milk Chocolate discs, Cost Plus World Market had no idea what I was talking about (although I saw that they do, indeed, carry Guittard 61% couverture a few days later), and I didn’t even think of Sur La Table at the time (you can get it there as well).
On baking morning on my way to work, I was able to stop by Surfas where I knew they had what I was looking for, and was even overwhelmed with their selection. Valrhona 62%? 74%? 87%? Cacao-Barry 66%? 72? Mahogany flavors or vanilla notes? Madagascar or the Dominican Republic?? In the end I settled on Cacao-Barry from Africa for $17 for 2 lbs. Eeek. My main concern though, was that the chocolate flavors hadn’t also been flavoring the dough for the last 36 hours. I wasn’t able to mix the couverture in until right before baking, so I hope that didn’t affect the overall taste of the product. I really don’t think it did, because it was absolutely the best chocolate chip cookie I have ever made. This variety isn’t really my favorite kind, but certain self-proclaimed chocolate chip cookie connoisseurs have declared this the best they’ve had as well. The recipe yielded a gorgeous caramel brown specimen with crispy edges that had the most delicious buttery quality to them and I found myself craving those edge pieces, though I usually prefer soft chocolate chip cookies. The 36 hour respite in the fridge definitely produced a more flavorful dough and this practice is soooooo worth it.
Could it be that any dough's awesomeness would increase exponentially when refrigerated? I'll have to try it with other recipes, but for now, this is IT.
No comments:

Hi, my name is Patricia

For my 16th birthday, I was given some baking sheets, a sifter, a pastry cutter, and some other baking paraphernalia that eludes me right now. It was just about the most exciting gift I had received up to that point and it was simply because I was in the middle of my teenage baking kick and my life’s pleasure at that point was trying out new recipes. I remember making fantastic “healthy” nectarine yogurt muffins, and failing miserably at bread-making (which still plagues me). The baking urge died off, and fast forward 9 years later – I receive baking tools yet again. I am in the throws of passionate love with baking yet again and I was elated with this thoughtful present once more. The difference is I don’t think this enthusiasm is going to die soon. Armed with dozens of recipes from blogs, funds for better ingredients and baking equipment, and the support of so many friends, the flames are just being fanned and the new goal is to make something of this hobby.
Growing up, as is typical with many Chinese households, our oven served as more storage space for pots and pans (not baking pans of course). My grandmother didn’t bake, my mother didn’t bake, so my baking idol was probably Debbie Fields when the Food Network was still the TV Food Network. And when I finally did feel compelled to try recipes out on my own, I was faced with the reality that we had no baking supplies! No mixer, no measuring cups or spoons!
Somehow, probably through the cooking prowess of my older sisters, we eventually acquired the bare necessities for baking (a muffin pan, a wooden spoon, measuring devices) and debuted onto the baking scene with Betty Crocker and Duncan Hines. You have to start somewhere, right? And without any household guidance in that department, boxed mixes were excitement enough.
Luckily, my repertoire has moved beyond stirring eggs and oil into an artificially colored powdery substance (although even those were a great lesson in the importance of accurate oven temperatures), and I have no intentions of going back. I roam the blogosphere these days and so many recipes from Deb at smittenkitchen or Molly at Orangette are such revelations – I want to try them all!!! One day – and hopefully not too far in the future I will bake my sisters’ wedding cakes (although with our record, who knows!). And that will still only be the beginning.
1 comment: