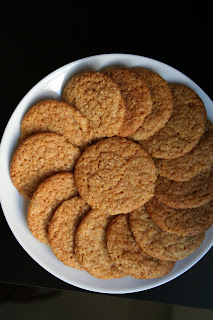 Once again, I love being apart of the Tuesdays With Dorie baking group because I'm forced - nay, politely encouraged by a set of very, very reasonable stipulations - to try recipes I wouldn't normally consider. Honey Wheat Cookies. The name alone doesn't illicit any excitement from me and I've overlooked this page every time I've ever thumbed through the book, but this week, Michelle of Flourchild had the pick of the litter, and as I haven't been able to participate in TWD as often as I would have liked earlier in the month, the honey wheat cookies would have to be baked.

Still unenthused by this week's assignment, I went out to get myself some wheat germ. I had my choice of raw or toasted wheat germ, but after deliberating about the prices and differences in taste, I went with the raw wheat germ. For an ingredient I figured I would rarely use, I decided it made more sense just to go with the cheaper option!

The dough, though easy to throw together, seemed too soft before being sent to the fridge to chill, but it ended up being fine to work with when rolling into balls before their coating of wheat germ. I tried to stick to the 10-12 minute baking window, but the cookies seemed far too soft and I ended up baking them for closer to 18 minutes, or until they were a deep golden color. I let them set up on the baking sheet for several minutes as they appeared to be too soft to transfer after just one or two, but the timing still yielded a soft, chewy cookie as intended. 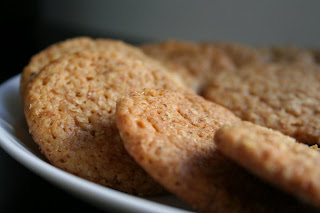 The honey was a very apparent flavor, but the wheat germ added an aroma that neither I nor my friends could identify. It reminded us all of something, but we couldn't exactly place it. And with its light flavor, soft texture, and diminutive size, one cookie quickly became five, especially among my coworkers. It's definitely the kind of cookie that you have and think, "Well, that was alright..." but before you know it, you've polished off ten. Clearly, it was much better than "alright".

My fridge is happily stocked with wheat germ now, and I have every intention of using it regularly. It can be familiar bedfellows with the flax seeds, oat bran, and amaranth I've been incorporating regularly into my baking, yielding breadstuffs with allure I would have never imagined. It feels so good to be wrong.
3 comments: 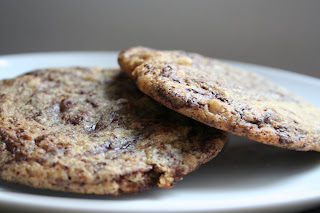 Last week, the public had the rare opportunity of purchasing and enjoying Dorie Greenspan's own baked goods at a pop-up cookie boutique, CookieBar, temporarily opened by Dorie and her son, Josh, at an Upper East Side hair salon. As a Tuesday's With Dorie baker, as soon as I heard this news, I was already plotting ways I'd be able to get a hold of these cookies. Week after week (and in between too), our kitchens turn out cookies, cakes, and pies that were a product of her vision, not sure if they were accurately executed or not -- an opportunity to try these recipes as they were meant to be tasted was not to be missed and I wasn't about to let a span of 3,000 miles stand in my way. Luckily, Cousin Albert decided he'd be coming back out West for Chinese New Year and I easily convinced him to leave his East Village bubble to procure some of Dorie's cookies for me (after all, we are a family of food lovers). After reports via Twitter of selling out of the cookies on days one and two, Albert was able to get uptown early enough (and on a blizzardy day enough) to secure the full assortment of the cookie shop's offerings for the end of our Lunar New Year meal.

It just so happened that Kaitlin of Kait's Plate chose Dorie's Best Chocolate Chip Cookie for this week's assignment, which was among the selections that Albert hauled across the country. It was all working out to be the perfect opportunity to see if my interpretations of her recipes bore any resemblance to the real thing. 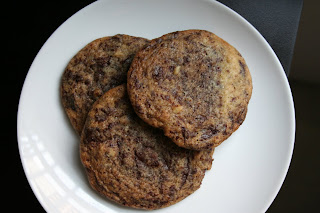 ...and they did!! Visually, they were definitely kin. Dark edges, paler center, mottled with tiny bittersweet chocolate specks in addition to larger chunks. They were an absolute hit at work and though I've relied on the now infamous NY Times chocolate chip cookie for some time now, I think there's room for more than one on my go-to pedestal. In all honestly, I actually preferred my cookies to the CookieBar chocolate chip cookie, but it wasn't really a fair fight. There's something about three-day old cookies that can't quite measure up to the crisp exterior, yielding center, and buttery goodness of nearly fresh cookies -- imagine that! I did also have the sables and coconut lime cookies though, which were so good that I am now going to have to replicate them this weekend. Dorie and son are actually looking for a permanent space in Manhattan, and when it does, I'll be back for My Best Chocolate Chip Cookies vs. My Best Chocolate Chip cookies, round 2!
2 comments: 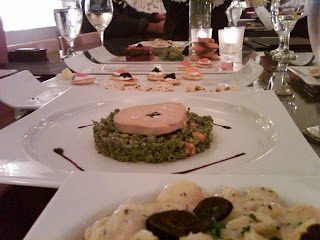 The intersection at Robertson and Beverly in West Hollywood is one I try to avoid at all costs during the work day, especially the unprotected left turning south on Robertson -- you'll be there for days during rush hour! After the sun sets, however, the cross street is a different creature. The writers at the Coffee Bean move on to a bar, the furniture showrooms close up for the day, women haul the spoils of their successful shopping day back home and the area becomes a shadow if its daytime self. And on the southwest corner of Robertson, just north of Beverly a pristine, glowing treasure sits -- and it is a treasure, with it's skillfully prepared dishes, affable service, and not-quite-discovered location. Like with your favorite band, you talk it up to everyone you meet who will listen, but don't want to them to "sell-out" with their new found fame either, only I want that for Petrossian and its chef, French-born Ben Bailly of Joël Robuchon culinary lineage because it's just too good to be kept a secret.

My first experience with Petrossian -- and possibly my introduction into the world of caviar -- was at their New York outpost maybe five years ago. The dining room was nearly empty but we still had a wonderful time gingerly scooping beluga caviar using mother-of-pearl spoons onto blinis decorated with all the accoutrements, accompanied by champagne and vodka. It was a divine afternoon of which I did not have to foot the bill because I probably wouldn't have had the fortune to enjoy it otherwise. That level of indulgence was what I associated the Petrossian Boutique & Cafe in West Hollywood with -- and they do offer the same fantastic caviar -- but, until I saw Jo's amazing food porn at MyLastBite, I hadn't realized it was so much more accessible. Though it is included on the menu and in various dishes, caviar neophytes need not be deterred. There are plenty of other caviar-less options, but it's quite possible that after a bite of the hand-cut steak tartare, cut through with a layer of caviar, you will be a convert. 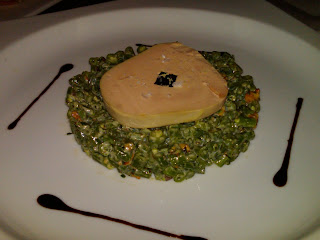 So on a brisk January evening, my group of girls coordinated with my sister's visit for my first Petrossian WeHo experience (the rest of my family had already come for brunch the month before). We started off with the smoked salmon rillette on toast that reminded us something our friend Susan would serve in her home, and that is a fantastic compliment. It had a delicate flavor, especially for salmon, and it felt familiar and intimate, inviting us back for more with each bite. It was followed by the foie gras salad, which I would probably never be compelled to order, but the photos and positive response to the dish nudged me in the right direction so we gave it a shot, and I'm so glad we did. The chopped green beans mixed with toasted walnut and black truffle vinaigrette complimented the smooth, rich foie gras terrine perfectly. We dug into the dish for more, but it wasn't for just the terrine or just the green beans -- it was for the composed bite because the salad, shot through with a hint of acid, was such a well-suited balance to the creamy foie gras. 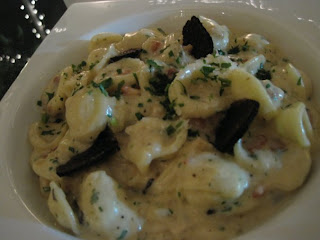 Another favorite of ours was the black truffle mac 'n cheese. A seemingly simple dish to make, I've had a couple that are gummy, congealed, or completely overpowered by competing flavors, and this was none of those things. Orrecchiete is a favorite pasta variety of mine for its chewy texture and it didn't fail me this time either as its crevices cradled the bacon studded sauce with each "little ear". Shaved truffles are a welcome addition to any dish and you will never find me declining some, but the sauce was so rich and aromatic that had they not been there, I wouldn't have been the least bit disappointed. 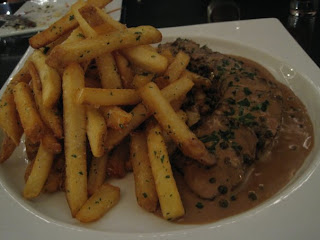 I am still dreaming about the steak frites that we had nearly three weeks ago. The frites were my kind of thickness with a wonderfully crisp shell and still meaty interior. What started out as a sample of the dish because I was already so full became a gorge on fries and meat, generously swathed in the peppercorn sauce before reaching my mouth. I have been a big fan of the steak frites at Church & State downtown, and their béarnaise was my favorite for a good part of last year, but suddenly, the sauce accompanying the steak, sweet with balsamic vinegar and shallot confit, has shot to the top and I don't know what can compete. I'm not even a condiment girl when it comes to fries (there's just no need for ketchup!), but the frites just about became a vehicle for more sauce. 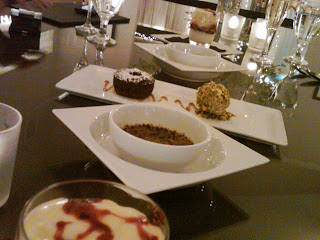 Of course we were beyond full, but being the gluttons that we are, we still ordered a trio of desserts for the table -- the vanilla panna cotta with white peach espuma, Sicilian pistachio crème brulée, and chocolate moelleux (a chocolate muffin-like-cake with a liquid center. By the generosity of Chef Ben Bailly, those three desserts became five and we all shifted our eyes at each when they arrived at the table, in disbelief that we could finish it all, but good call, Chef -- we demolished them all. I have an affinity for all things pistachio so the crème brulée with a caramelized top of the perfect thickness I could not get enough of, but the panna cotta was so smooth and had such a silken texture that I must have had the one closest to me all by myself.

To be surrounded by the company I was with is always pleasure enough, but bite after bite sent us into gastronomic bliss. I haven't even mentioned that we had a no-pork-fish-foie-gras-or-miscellaneous-animal-parts eater as well as a friend with a seafood allergy and we were all sublimely contented. We didn't even scratched the surface of the menu -- the short rib raviolo, foie gras crème brulée, and seared duck breast await, though I don't know how we'll get past the foie gras salad, Napoleon tartare, or steak frites, but I reluctantly hope to see the rest of city's food lovers there the next time, and the next, and the next.
3 comments: