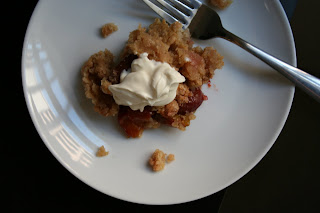 I've always been a fan of the rustic. Modern, streamlined homes -- I find them cold and uninviting. Ergonomic Aeron chair? How about a painstakingly crafted cherry wood mud bench?? I picture exchanging wedding vows (that may or may not ever be recited to anyone) on actual leaves outdoors in a grove of trees rather than on a paisley or cornucopia-patterned carpet in a stuffy hotel conference room (not that there's anything wrong with that). And as much as I appreciate new flavor combinations and techniques in food, the way to my heart is through long braises, Old World comfort food, east and west, and handmade "imperfections". I will devour a 7 course tasting menu with all manners of French flavors and techniques, proclaim dish after dish as inspired, unquestionably pleasing, and maybe even the most delicious thing I have ever put in my mouth, but in the end, I will want anise-scented beef noodle soup in a stained plastic bowl, a craggy currant scone, or mushroom/pork soondubu over mixed rice with adzuki beans.

When I first came across Molly Wizenberg's plum crumble in late September on her blog, Orangette, there was no doubt I'd be trying this dessert out. The beautifully golden, nubby topping with the fruit juices oozing out from the sides called my name in its unevenly browned and family-style dessert splendor. Soon, I was hunting for the Italian prune plums that she touted so highly. As luck would have it, a week later at Gigi's Farmers' Market, located in the Americana at Brand in Glendale, I came across a basket of these plums from Ha's Apple Farm and nearly jumped out of my skin. My market-frequenting self had never noticed these prune plums before and had pretty much dismissed them as a variety that was nearly mythical in Southern California (much like sour cherries for making brandied cherries) but there they were, in the flesh, at such a newly established farmers' market! (I have since found these plums, as well as the French prune plums, at Ha's Apple Farm stalls at the Silver Lake, Hollywood, and Third Street Promenade Saturday markets.) 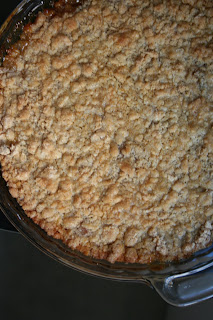 The recipe is ridiculously simple, and its appearance may convince you of that, but the end taste would not lead you to believe so. The fruit becomes so soft and yielding, ever so lightly sweetened with brown sugar, and given a gentle zing with both ground ginger and candied ginger. The real star of the show, however, is the crust. Fruit lovers may disagree because the plums shine too, but the crisp shell is buttery, crunchy, juice-softened, and plum-scented all at once. I've intended to make this with any variety of fruit, but with the Italian and French prune plums still readily available, I haven't yet been able to bring myself to stray. Many friends have had the chance to sample the crumble now, and even during a week when my kitchen was churning out a whole slew of desserts, this dessert has come out on top.

Creme fraiche isn't at all necessary as the crumble is so lovely in its unadulterated state, but with a dollop of tangy goodness, the dessert becomes a revelation.
3 comments:

Thanksgiving is just about a week away and I'm only now remotely getting into the swing of things. I think it's this "amazing" Southern California weather that has been keeping the excitement of the holidays at bay -- I don't know how Floridians don't just skip Thanksgiving and Christmas altogether and go straight to Memorial Day. I'm personally not a fan of the eternal mild summer we've been having and am loooooonging for the brisk air of New York City that was biting at my cheeks two weeks ago. 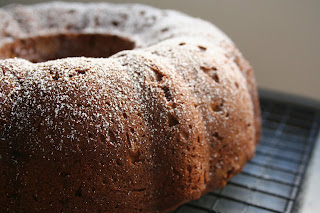 Driving through the valley over the weekend, I actually had a vision of brown, red, and orange leaves, dancing in the wind along the street and was startled by the realization that the last quarter of the year has been passing far too quickly and I had better get in the mood before my favorite time of year speeds by and it's January - ugh. The worst!

It's been a crazy packed month so far (when has that not been the case in recent memory??), so I've only now gotten a chance to delve into this month's Tuesday's With Dorie assignments, but nothing else says "holiday" quite like pumpkin even if I don't think it should be strictly reserved for fall months, and neither does Libby's! Britin of The Nitty Britty chose Dorie's All-in-One holiday bundt cake this month, and it's just what I needed to cook up some nostalgia for last year's Thanksgiving, and look impossibly forward to this year's festivities. 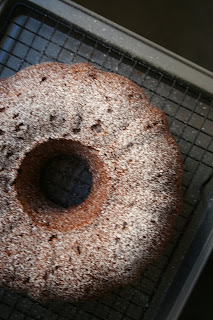 Full of apples and pecan suspended in a burnt-orange crumb, every bite was full of the omnipresent fall spices of cinnamon, nutmeg, and ginger (I decided to omit the cranberries). It was so moist and held together in such a way that I wasn't sure the cake was baked through, but it was indeed. Its loose crumbs were just masquerading as tight clumps. I find a lot of pumpkin loaves use oil as its fat, and unfortunately, you can usually taste that presence, however delicious the cake may be. This loaf had none of that staleness or mouthfeel. With the addition of apples to the pumpkin puree, there's no drying out this guy, even if it was in the oven for five minutes too long. In fact, I think the extended time allowed a nice crust to form, creating a lovely contrast between the tender interior.

There are some recipes that you turn to when you want to a recollect certain memories or feelings, and this is the perfect cake to remind you of all things fall. Thanksgiving dinner in 9 days -- I cannot contain myself!!
2 comments: