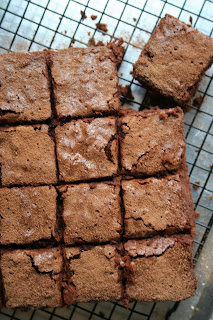 When does one decide on their preferred type of brownie?? As with chocolate chip cookies, most everyone has a certain standard for the best brownie ever, but there are innumerable riffs on the basic brownie that have become almost standard in themselves over the years. Fudgey, cakey, dense, light-as-a-feather, chocolate chips, nuts, chipotle, cinnamon, peanut butter swirls, peppermint, toffee bits, butterscotch chips, espresso, brown sugar, browned butter, and now -- what's this?! -- honey?? With all these possibilities, people have their favorites, but I can't see anyone ever denying a brownie because, after all, isn't it really all about the strong hit of chocolate?

Suzy of Suzy Homemaker chose Honey Nut Brownies for this week's Tuesday's With Dorie recipe, and in all honestly, the name had no appeal to me initially. Is this going to be like chocolatey Honey Nut Cheerios?, I wondered. What's the deal with honey in a brownie?? I was proven wrong. 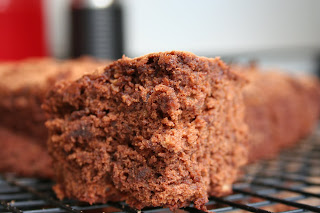 Though I'm more a fan of brownies on the dense side, I still cannot stay away from a cakey brownie, especially not a good one, and with the substitution of whole wheat pastry flour, I didn't have to. The flour switch may have made the brownies a little too cake-like, but the flavor was definitely marvelous. Anyone passing by the kitchen at work had to steal a sliver even after they had already polished off two pieces because the smell was so intoxicating. It must have been the honey (or Lyle's Golden Syrup as I didn't quite have enough honey so I made another little substitution) because I don't believe I've ever made a brownie whose smell permeated through rooms and minds like that one did.

Needless to say, that brownie had a pretty short lifespan. Most of the office couldn't resist its charms and they made quick work of it. Though the brownie didn't linger, I'll have to re-use the honey trick on another recipe and see what results that yields. A chewy, nut-studded, honey-scented chocolatey square...ohhh, the rapture!
1 comment: 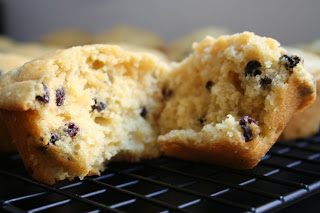 I'm by no means a religious person, but befriending and surrounding myself with primarily Catholics in high school, and having required instruction in Catholic traditions too, I know my way around Lent a little bit. I'm fairly certain that when my friends were giving up Diet Coke or red meat during the period between Ash Wednesday and Easter Sunday, I was happily enjoying both, but in recent years, I've come to adopt a sacrifice or two just for the sake of seeing if I have the will power and follow through for it. I don't care to deprive myself ever (which is not to say I have fried chicken and doughnuts everyday), but every now and again, it's nice to have a heightened mindfulness about what I'm putting into my body.

This year I'm giving up white carbs and cheese. As a member of Tuesdays With Dorie, I am a pastry and baked goods fiend as I'm confident most everyone else is the group is. Fresh baguettes, pie crusts, layer cakes, tea cakes, flaky croissants, rich rugelach, not to mention cheesy, whites pies, Chinese boiled dumplings, and spaghetti carbonara -- I love it all, and I'm going to miss them for the 41 remaining days. Luckily, I love whole wheat products. A whole wheat bagel with peanut butter is something I crave as much as buttered rye toast, so I'm not completely deprived, but I'm not going to gorge on whole wheat carbohydrates either. 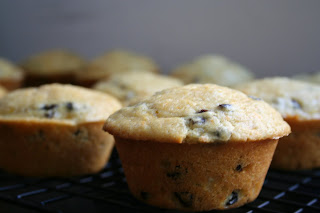 This week's TWD assignment of Citrus-Currant Sunshine Muffins by Lauren of Bella Baker was an easy job for a whole wheat pastry flour substitution -- that, and I ran out of all-purpose flour (what luck!), so the temptation wasn't even there. I also didn't have as much orange juice as the recipe called for, but buttermilk was readily available to step in. The batter came together in no time at all and what yielded probably did not have the tender crumb that all-purpose flour would have made, but the muffin was nevertheless delicious. It really did taste like Spring in your mouth. I'd love to try adding a topping of streusel next time to make it an orange coffee cake muffin, but the possibilities are endless to this muffin base.

Ahhh, with whole wheat pastry flour, these next 40 days will be a lot easier to handle.
1 comment: