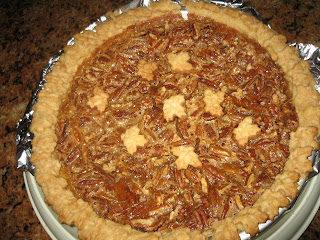 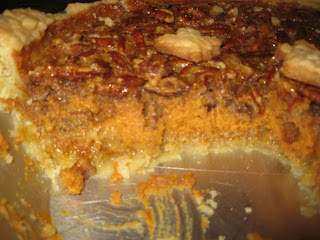 I'm so excited for my inaugural entry for Tuesdays with Dorie. It's been on my radar for many months, then I finally started a blog and have been trying to fill it with enough content before venturing into this baking group. I have sung my praises of Dorie's recipes before, and now, every Tuesday, I will be doing it with regularity (given the success of each week's recipe, of course).

Appropriately enough, this week's pick by Vibi of La Casserole Carree was Thanksgiving Twofer Pie. Some people are pumpkin pie devotees, others worship in the church of pecan -- why not kill two birds with one stone? I have to admit, I used to look forward to the seasonal pumpkin-pecan cheesecake at one well-known cheesecake-centric restaurant all year, so something with the same flavors, and made with a little more love was right up my alley.

I had previously committed to baking a pie for my good friend, Tin, and was thinking of Dorie's Sour Cream Pumpkin Pie, but this was another case of killing two birds with one stone. Maybe I shouldn't test recipes out on friends, especially on a dessert that people have very strong feelings about, but it didn't turn out half bad. I decorated the pie with maple leaves, and though it was a lot of work, I think it was worth it. I can't say I would do it every time because of the tediousness of carving in the veins, but it does make for a lovely visual.

I was told that the pie didn't slice so well, and the proof is in the pie, but it was still darn delicious. I even kept it in the oven for at least 10 minutes longer than the recipe stated. I'll have to try it for myself sometime -- Christmas maybe?
4 comments: 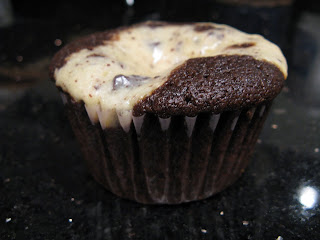 So, it's a little late of a post, but it's never too late to celebrate the amazing feat of having elected such an inspirational leader for our country right? Back in October, I read about this baking event to raise money for the campaign in swing states on EatingLA and while some awesome folks went to Nevada and drew attention to the cause by making human pyramids at intersections and going door-to-door, I contributed by spending a day baking. Not a far reach for a Saturday afternoon/evening, but I like to think I was responsible for a tiny bit of the over $7000 that this sale raised in one morning. 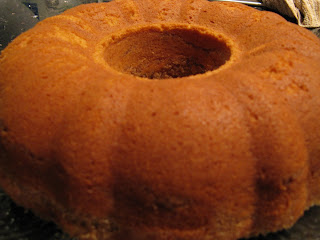 While sometimes it's nice to make something unique with a little bit of ingenuity, I feel that at bake sales, there's a certain expectation of what the treats should be, and one shouldn't stray too far from that. Cookies, bars, muffins, cupcakes, and coffee cakes are all pretty standard as they're such portable crowd-pleasers and who has ever met a homemade cookie that they didn't like?

Okay. I have, but usually they're pretty good. 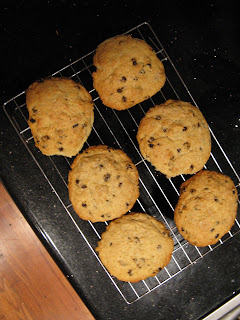 It was a tough decision, but I settled on David Lebovitz' Black-bottomed Cupcakes, a classic sour cream coffee cake, The Cheeseboard's currant scones,and the image on smittenkitchen was just too tempting, so peanut butter brownies. 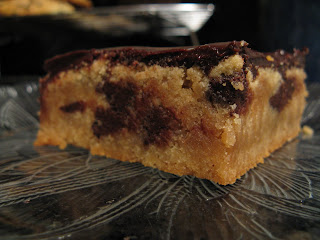 I was a little late getting there, but was floored by what I saw once I arrived. It was a huge sale with so many volunteers -- children manning the lemonade stand and adults holding fort behind the baked goods. It really speaks to the involvement of the community as so many families were holding up signs for the bake sale, cheering on either side of the street, and those that weren't working the sale were strolling up with their loved ones and making their contribution by purchasing the goods. There were long tables packed with cupcakes, coffee cakes, all sorts of cookies, loaves, and there were still more things that couldn't fit on the spread yet. I had never seen anything like it and got that warm, fuzzy feeling witnessing such a vision of community. 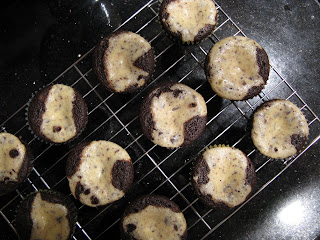 I couldn't leave without buying a couple things, and what did I end up with? A currant scone from Clementine and a slice of streuseled sour cream coffee cake. "Wait...isn't that what you made?" Yes, it is. Those are a couple of my favorite things that clearly I love to make, and eat. Given the option, and even with dozens of other tantalizing temptations like pumpkin cookies and sticky buns, I cannot resist the simple pleasures of a scone or coffee cake. With the addition of a latte from Lamill, it was a rewarding, inspirational, lovely morning indeed.

This bake sale obviously wasn't what tipped the presidential race over the edge, and I know even all the bake sales around the country weren't responsible for the victory, but looking at the incredible involvement of the neighborhood for this cause, the call for change was deafening. And if this showing existed all over the US, it's no wonder we can now look toward the near future with even more hope.
2 comments:

As American as apple pie 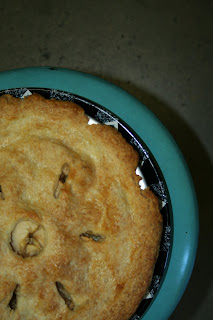 I can't say apple pie has ever been a favorite of mine. Maybe it's my experience with primarily too-mushy supermarket pies or overly-sweet Marie Callendar's pies, but the filling usually doesn't call my name the way banana cream or pecan pies do. Give me one of those and I won't be able to help myself.

Pie, in general, I have never really forayed into, save for the S'more Pie I made for Tin's Summer party this year (which was crazy good, albeit a lot of work), but it had a graham cracker crust and it's high time I tried making a classic pie with crust made from scratch, rolled out, and carefully lifted into the pie plate. As is characteristic of myself (and with the harrowing experience of rolling out dough for Cornish pasties on my counter), I wasn't about to take on this task unprepared so I waited until I acquired a silicone pastry mat to facilitate the challenge that is pie dough. And of course there's my trusty Cuisinart that I finally sprung for when taking on the Hazelnut Brown Butter Cake in July for a dear, dear friend's birthday. Don't know how I ever lived without it.

As we enter into fall with an abundance of crisp, sweet, and slightly tart organic apples at the farmer's market, this seemed like the most logical choice for a first-time pie-maker, not to mention its ubiquity and reflection of Americana. The purveyor recommended Tsugaru and Mutsu apples for baking, and I already had some humongous Fuji apples at home. I decided to go with Dorie to hold my hand in this process and, as usual, it was a stunning recipe.

It might be plain as day to a lot of people, but I had no idea how important apple variety was to the outcome of the pie until I made it for myself. Maybe because I've only had store-bought apple pie that I haven't cared much for it, but I found the filling equally as delicious as the crust this time around -- and I'm a crust MONSTER. {Sidenote: Always keep your crust scraps, roll it out, cut out designs for decoration, or just rip up shards (if you can't be bothered to make it look pretty) and bake it up until its golden brown for pure deliciousness.} The apple choice had a lot to do with the pie's success as the Tsugarus and Mutsus really had a brightness to them that apple pie mush normally lacks. And a varied apple choice also lends itself to a contrast in textures so each bite alternates between soft fruit and more toothsome chunks.

The crust was, of course, pure deliciousness. Tender and flaky, buttery with just the right amount of sweetness. It's no wonder that Dorie calls it the good-for-everything pie crust. It was the perfect envelope with which to deliver the filling and now I'm definitely an apple pie convert. Seriously -- it's on par with Ikeda's, and probably even better. I can't wait to perfect the execution now!
No comments: