It was my own fault.

My mind has been in a million places lately, and I ignored my better judgment and kept this week's Tuesday's With Dorie recipe from Kelly of Baking With the Boys in the oven for quite a bit longer than I should have. By now I should have learned to check cakes far earlier than recommended in a recipe sometimes, but I was neglectful this week, and it showed. 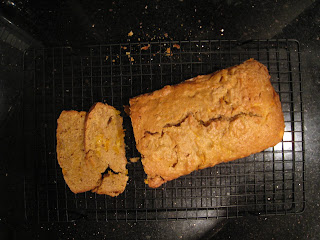 What could have been a resoundingly perfect, delectable slice of bread, according to this week's Ps & Qs was just "okay" in my book. The edges were rather hard, and the innards didn't taste particularly strong of mango, but I'm sure I kept the loaf in the oven for too long. Those moist bits surrounding the fruit always throw me off!!! The taste wasn't bad at all, and I didn't think there was too much ginger, but I'm crossing my fingers that a day tightly wrapped on the counter will soften up the crust and deepen the flavors.

Only time will tell...
4 comments:

A pick-me-up kind of cake 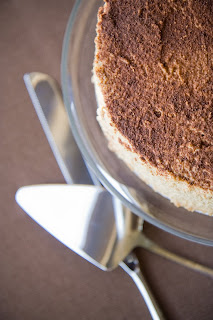 It's been a whirlwind week and a half. I paid a long overdue visit to New York where I unfailingly consumed a shocking number of calories in the name of "research" from Grandaisy pizza bianca slices, baked goods from Baked in Red Hook, Momofuku Milk Bar, Levain Bakery, Two Little Red Hens, Jacques Torres, and Bouchon, as well as wholly enjoyable meals at Egg in Williamsburg, J.G. Melon, Barbone, and, of course, Momofuku Ko. I allowed myself to taste every delicious bite set in front of me, and especially ones I sought out, as I attempted to counter their effects with many, many steps on the streets and avenues of the city. 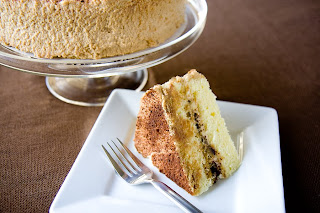 As soon as I returned, it was time to bake as I missed a birthday during the trip with several other birthdays upcoming, as well as this week's Tuesday's With Dorie selection of Tiramisu Cake by Megan of My Baking Adventures. The weekend was full of butter, flour, sugar, and eggs, combining to create banana cake cream cheese frosting, butter yellow cake with bittersweet chocolate frosting, red velvet cake sans food coloring, and then this. The tiramisu cake was definitely the most time consuming of the bunch, but the end result was well worth the effort. It tastes exactly like tiramisu in cake form, and save for a little dryness in the cake (how does that happen with all that espresso syrup??), and the alcohol curdling the frosting (didn't look so good, but boy was the mascarpone frosting tasty!), it was a wonderful cake. Tweaking will have to be done next time to achieve perfection, but it was a recipe that I may not have tried on my own.

This is the kind of recipe I joined Tuesdays With Dorie for. 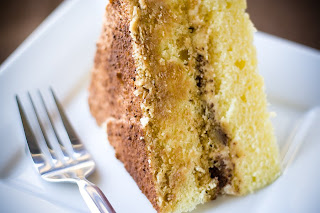