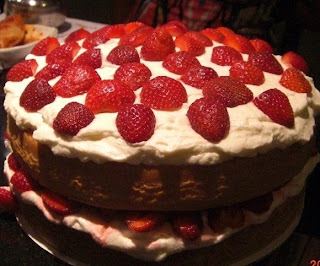 There are certain foods that we associate with certain people, and aside from Thrifty's Butter Pecan ice cream, Sara Lee pound cake is what I associate most with my mother. We were never a household with too much junk food -- and my siblings and I usually weren't bratty children who screamed at the top of our lungs for Oreos or sour straws anyway for fear of our parents' wrath -- but every once in awhile, there would be a frozen pound cake, nestled in that tell-tale foil pan. It was a delight that in our family of six would never last long. Still, it is a fond memory of childhood that with a slowing metabolism and a more discerning eye for ingredients I no longer partake in, but tasting Ina Garten's Strawberry Country Cake brought me back.

Strawberries were already growing aplenty back in May and there were some crazy deals at the farmers market -- a half flat for $6! You can't beat the price, but can you eat all that?? I ended up trying this recipe after trolling the internet for something to make with my plenitude of berries and several people touted its deliciousness on Serious Eats. I brought it to a last minute informal dinner and it was so simple, yet so satisfying. Like a strawberry shortcake without the hard biscuit, it incorporates lightly sweetened whipped cream with juicy strawberries and a rich cake. Just three components, but the sum is far greater than its parts. And the cake! Ohhhh, I could eat it for days! The cake is lightly hinted with lemon and orange zest which I think gives the cake some added dimension.

The recipe actually yields two cakes as it recommends you halve the contents of one 8" cake pan to build your cake. I used a 9" pan the first time, which turned out quite well, but I would have liked some more height to the cake, especially because I left the sides unfrosted though everyone was still delighted with the results. For my sister's birthday, she requested this wonderfully fragrant cake and because it also keeps well in the freezer (unfrosted of course), I was able to assemble it right before her birthday dinner to culminate a weekend trip to San Diego. Because it was a special occasion, I thought a taller cake would be more appropriate so instead of halving each cake, I used both cakes. I did use more whipped cream and more strawberries, yet there was probably still too much cake per bite. I didn't think that could possibly happen, and it was definitely tasty enough, but Ina got it right the first time. I think I'll stick to the halved cake and just keep the other cake in the freezer for a rainy day, and so it's perfect when an occasion comes up out of the blue. Definitely a solid recipe to keep in your arsenal.
2 comments:

How do I love thee? Let me count the ways...

It's a warm summer's morning. I'm relaxed with a large iced decaf coffee from Groundwork in hand, savoring the smell of freshly popped kettle corn and lovingly gazing at stone fruit, but still walking purposefully toward him. I see him, but does he see me? The sea of visor-clad shoppers towing baskets of perfect peaches and beautiful leafy greens part, and we make eye contact.

He smiles and my heart skips a beat.

I know what he means--he's got what I want.

Yes, I am a lucky girl. Today I get my pick of four, count 'em FOUR, cartons of white, brown, and blue-green egss of varying sizes, still speckled with chicken waste. This doesn't deter me from purchasing them at all. In fact, I'm kind of excited by it. I mean, how much fresher can you get? 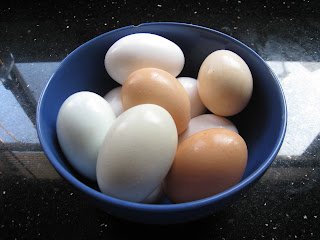 At any given time, you will find at least two cartons of eggs in my refrigerator. At this moment, there are actually three -- one of cage-free, large store bought eggs, and two from the farmers market. My cholesterol levels must be through the roof, right? Actually, I think it's pretty under control. I'm partial to pastured eggs which have been reported to have considerably less cholesterol than the normal eggs you find at the supermarket, and considerably more deliciousness, in my opinion. The organic, cage-free, or free-range eggs that are at Whole Foods, Trader Joe's, and the like are an improvement from other factory farmed eggs, but that terminology has pretty much been rendered useless. Organic simply means that the chickens are fed organic feed. Cage-free means that the little peckers may not be in cages, but they could be kept in very confined quarters with thousands of others, mutilating each other or contracting diseases. Free-range means that the chickens have access to the outdoors, but that could just be a tiny door to the yard that the chickens don't even know to go through.
I'm not saying my way is the right way, but with this knowledge, I prefer not to even deal with misleading USDA jargon and get my eggs from the farmers market. I've purchased eggs from every supplier there, and have definitely picked my favorite. There's no way I'm going to reveal its identity either, because they only have a few dozen each week and I get there before 8:30 just to increase the odds that there'll be any when I get there -- I have been disappointed MANY a time. Some days, he is all sold out by the time I get there (which is always before 9am). Other days, the chickens just haven't laid enough eggs and he has to save a couple dozen for other farmer's market vendors (See! The eggs are that good!) When I do score a dozen, my heart soars and I break out into a grin that cannot be wiped away.
Because these eggs are completely and utterly delicious by themselves, they are so suited to being prepared my favorite style -- pan fried over medium. And isn't everything better with a little oozing yolk on top? Croque madames, pastas, hash dishes... As soon as the egg lands in the heated pan, I am in awe. The slight spread of the egg white. The height and deep orange hue of the yolk. It is a sight to behold and so unlike a regular egg. And the taste? Incomparably rich. I don't need a vegetarian fed hen -- the little bugs and insects that the chickens feast on make all the difference in the color and taste of the yolk.
I still keep the standard large eggs around for baking as the volume of the pastured eggs can vary so much, but these oblong orbs of heaven are the apple of my eye (especially the blue-green Araucana variety!). Instead of standing at the kitchen counter, wolfing down a bowl of cold cereal, I create a more well-rounded meal with the egg being the highlight. I savor it at the table and sop up the smooth and creamy yolk with pita or brioche leaving nothing to waste. The ritual makes all the difference in my morning.
I'm sure an ode to such a basic food sounds excessive, but I truly love it, and for those that live to eat, shouldn't every dish spark such enthusiasm?
No comments: 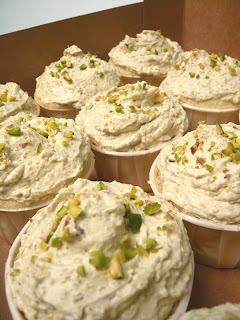 It’s been a crazy couple of weeks, what with moving someone out, and then moving someone new in. And it’s always an adjustment taking on a new roommate no matter how easy-going one is. What is their bathroom routine like? How anal is she about dishes in the sink? What’s the best way to communicate with him? And there’s always the lingering suspicion that they may not as they seem and sooner or later they will flip out and show their true colors.
Then there is the huge task of incorporating their belongings in with one’s own. With a pretty stocked kitchen already, this process is daunting. My cousin didn’t take anything with him to New York, so the kitchen is still stocked with the belongings of 3 persons, and there wasn’t even enough storage space to begin with!
Amid the moving headache, a friend had requested pistachio cupcakes like the ones at Crumbs for her upcoming birthday. It’s been awhile since I had brought those to the office so I wasn’t entirely sure what they were like anymore. Cream cheese frosting? Buttercream? Nuts in the cake? Almond flavor? Well the online menu says vanilla sponge cake filled and frosted with pistachio buttercream, but I was quite certain I tasted a hint of almond in the cake before. I ended up taking the Billy’s Vanilla Cupcake recipe and adding a bit of almond extract and frosting it with the pistachio buttercream from Epicurious.
As always is the case with the Billy’s recipe, I was bracing myself for exploding cupcakes. I’m not sure it it’s because the butter hadn’t distributed itself evenly usually, or if the soufflé cups were too full, but there have been a few trials were 75% of the cupcakes were disgusting messes. This time I was careful to barely fill the cups halfway and I took great care in incorporating the butter without overbeating. Only a few casualties!
This was actually my first time making buttercream, but though the reviews were mixed, the recipe still sounded solid. It’s a fussy and time-consuming process, but I recommend starting the buttercream just before the cupcakes (if you’re planning on making it the same day) so that the half-and-half, pistachio mixture can cool, and then the cupcakes can cool while the pastry cream is also being brought to room temperature.
The cupcakes turned out wonderfully and everyone adored them, however next time I might try to incorporate pistachios into the actual cake. Maybe fill them with some kind of cream or fruit filling? Pistachio and chocolate is such a great combination so maybe a chocolate cream filling or frosting? The possibilities are endless so stay tuned. 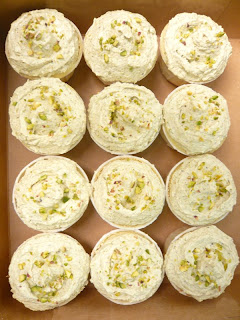 about 24 cupcakes (although the recipe says 30, I've never had it yield so many)

1. Preheat oven to 325 degrees. Line cupcake pans with paper liners; set aside. (I used souffle cups baked on a baking sheet.) In the bowl of an electric mixer, combine flours, sugar, baking powder, and salt; mix on low speed until combined. Add butter, mixing until just coated with flour.

2. In a large glass measuring cup, whisk together eggs, milk, and vanilla. With mixer on medium speed, add wet ingredients in 3 parts, scraping down sides of bowl before each addition; beat until ingredients are incorporated but do not overbeat.

3. Divide batter evenly among liners, filling about 2/3 full. If using 4 3/4" souffle cups, fill slightly over half full. Bake, rotating pan halfway through, until a cake tester inserted in the center comes out clean, 17 to 20 minutes.

4. Transfer to a wire rack to cool completely. Repeat process with remaining batter. An advantage of using temperamental souffle cups is being able to fit more cupcakes (and maybe even all) at one time, allowing all the cupcakes to rise similarly instead of the normal not-quite-as-tall second batch. Frost with Pistachio Buttercream.

1. Bring half and half and pistachios to boil in heavy small saucepan. Remove from heat; cover and let stand 1 hour. Whisk sugar, yolks and flour in medium bowl to blend. Bring half and half mixture to simmer; gradually whisk into yolk mixture.Return to same saucepan; stir over medium heat until mixture bubbles thickly, about 5 minutes. Mix in vanilla. Transfer to processor; blend until nuts are very finely chopped. Transfer pistachio pastry cream to bowl. Cover and cool to room temperature, about 2 hours.

2. Using electric mixer, beat unsalted butter in large bowl until fluffy. Add pastry cream by 1/4 cupfuls, beating well after each addition. (Can be prepared 2 days ahead. Cover and refrigerate. Bring to room temperature before using.)
No comments: