Back in the swing of things. 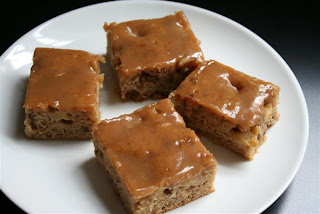 I've been so busy.

No, really. I know it seems like that's my most common declaration, but the past several weeks have been one event after another. Starting with July birthdays, there has been hardly a second to breathe. My sister's visit early on meant lots of goodies were to be baked, to throw her off to the fact that a good friend of her's was flying me up to be a part of her birthday festivities, and I would be bringing up treats then too, of course (the ruse was a triumph, by the way). 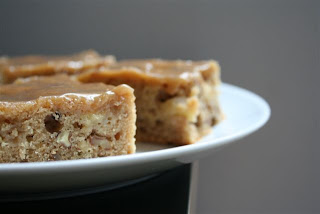 Subsequent weeks were filled with more baking (that I'll hopefully get to on here, though we all know how that goes), much needed visits from out-of-town friends, getting acquainted with new ones, and the beacon of my calendar since January: a trip to Paris, Barcelona, and London (that I'll hopefully touch on as well).

The hectic schedule hasn't quite died down, so it was a blessing that this week's Tuesday's With Dorie pick by Karen of Something Sweet was Applesauce Spice Bars. It isn't the most exciting recipe in the Greenspan tome, but it is reliably delicious and whips up with minimal effort and time. I was so pleased that no stand-mixer attachments had to be dug out, and I looked upon the 9x13 pain with relief this week, as opposed to the disdain I normally feel. The caramel glaze (though a lovely and necessary touch) was the most arduous part of the recipe, but that was not even so bad.

It wasn't a week for variation, so aside from omitting the raisins, the recipe was followed quite strictly -- and I did include some brandy as I had a tiny bit left from the two pounds of cherries I have soaking in the liqueur right now. It's hardly noticeable, but I think it adds a certain intoxicating aroma. The resulting cake is moist and simple, and though at first bite I thought, "That was good, but a taste is enough", I somehow found myself going back time after time for slivers -- slivers that add up to quite a substantial piece.

An easy recipe that keeps you coming back for more. Could there be a better welcome back recipe?
1 comment: