Yeasted breads were the bane of my existence for the first 11 years that I was turning butter, flour, sugar, and eggs into something palatable. After being struck by the baking bug at age 15 and being gifted a respectable assortment of pans and miscellaneous baking accessories, the first cookbook that I added to our household's collection (which included several volumes from Fu Pei Mei, matriarch of the Chinese broadcast television cooking shows, and a 3-ring bound Better Homes & Gardens New Cookbook) was the Pillsbury Healthy Baking book, purchased at Barnes & Noble in Fremont, CA, probably passing time after Saturday Chinese school. I could imagine the stern look of disapproval on my parents' face if I had purchased a full-price, full-fat book of cakes, cookies, and other confections, so this one, with the blazing "Bargain Books" sticker, "healthy" keyword, and oat-studded loaf on the cover was a safer bet.
\ 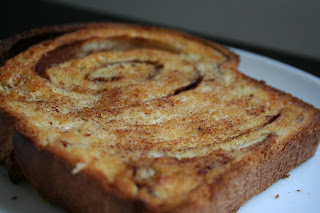 After successfully trying out a few quick breads, the next logical step was a real bread. A bread leavened with yeast. Being so diligent about following directions, I probably did everything as instructed by the recipe, however, when it came time for the honey oat dough to rise, it just didn't. All afternoon, the loosely formed dough just stayed the same shape, same volume. I knew my house was cold, but really?! No rise, whatsoever?? I finally decided to turn on the heater and set it in front of the vent. At that point, it may have risen a tiny bit and perhaps a skin had formed and hardened from the heat. Still, I persevered and decided to take a chance and send it to the oven. I was really hoping to peek into the oven halfway through its baking time and see the loaf loftily rising over the edge of the pan, but no such luck, and by the time the recipe suggested to take the loaf from the oven, it was still the same sad, oblong shape. Of course I had to taste the thing, and it wasn't half bad! Unfortunately, it was also hard as a rock.
There was another unsuccessful attempt with pizza dough a couple years ago (pita bread ended up being the vehicle for squash blossoms and asiago), but last year, my failures still vivid in my mind but somehow not affecting my resolve, I make a leap with challah bread. This time I made use of the space heater in my room (it being the smallest confined space in the fourplex, thus keeping in the warm air), propped my bowl of dough off the ground, and just waited. The challah turned out beautifully. It was magic. 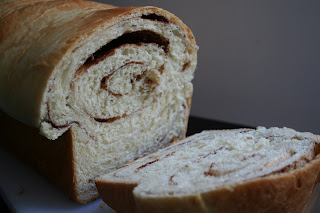 That experience spawned subsequent tries at bread loafs, buns, and croissants, all of which employed the bringing-the-dough-into-the-bedroom technique and all of which were successful. This time of year, however -= when my butter needs only sit on the counter for half an hour to soften instead of the usual 3 hours -- the dough has been a-rising without an additional artificial push, so this week's Tuesday's With Dorie selection of Raisin Swirl Bread by Susan of Food. Baby. was a very welcome choice. Unfortunately, I actually let the dough rise for too long as I was waiting for other baked goods to finish in the oven, and it was gaining much more height than desired. Still I threw it in the oven, just happy it wasn't a leaden mess, but it did grow bigger than its britches and emerged with tumors and keloids and a nice tan. Though not the most photogenic loaf, it had fluffy and pillowy innards, a firm crust, and was perfumed by freshly grated nutmeg. I neglected to add the raisins before I rolled up the dough, so it became cinnamon swirl bread with a very mild sweetness. Next time I'll probably increase the cinnamon, but it was perfect in taste and texture in every other way. Eaten straight from the loaf, it's the kind of bread that you could eat 3/4 of before realizing what you've done. Toasted and buttered with a cup of tea, you're thankful for life's simple pleasures.
2 comments:

The taste of early summer. 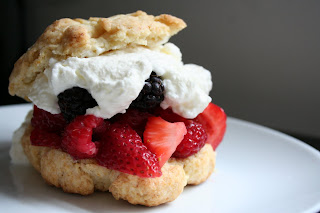 There may not be a more perfect dessert for this time of year than the tender shortcakes, chosen by Cathleen of The Tortefeasor for this week's Tuesday's With Dorie pick. The farmer's market is overflowing with every berry you can think of (and some you had no idea about -- tayberries?! what are those??) and the scone-like texture of these buttery shortcakes could not be a more perfect base for sweet and succulent berries topped with a dollop (or huge cloud) of fresh whipped cream.
The shortcakes are much like cream biscuits with a slightly craggy, crisp crust, and dense crumb -- tender would actually be the most apt adjective for them -- and come together so quickly. It's a brilliant dinner party dessert because the dough (which is already tossed together in minutes) can be made ahead of time and frozen, then popped straight into the oven. The oven is turned up pretty high, but the shortcakes don't actually bake that long so your guests won't be sweltering in the kitchen. Assembly is a breeze and voila! You're ready to thoroughly please a room full of people. 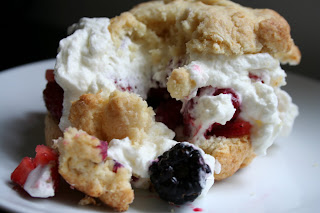 The biscuit can be the backdrop for so many other flavors and I intend on testing many (ginger, cinnamon, cardamom, lime zest, orange) and changing up the fruit filling appropriately. i have no doubt that this recipe will not just be filed away in my arsenal, but will show up in the recipe boxes of my children, grandchildren, and great-grandchildren. That could be the greatest compliment there is.
No comments: