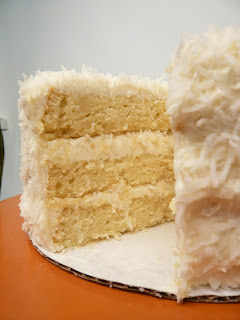 I have nothing against coconut, and actually quite like coconut creme brulee, curries with coconut, and those gelatinous coconut flavored squares at dim sum, but coconut cake has never appealed to me. I've never even tried it actually, because there has never been any desire to. It doesn't appear that anyone else does usually either, because I'm sure had anyone in my company ordered it, I would have had a taste. Maybe it's the appearance of the cake that is unappealing. Showered with a flurry of sweetened coconut, you would seemingly have to gnaw at it like a horse does with hay -- too much work. Or maybe it's the uniform color that most coconut cakes have.

How can it possibly be good?

Anyhow, it wasn't until a friend of Alix' mentioned this as one of his favorite cakes did I ever hear of someone having an affinity for this dessert, and, because I'm all for trying new things, I decided I would have to make it at least once.

Again, since most people don't seem to love coconut cake as much as, say, red velvet, or strawberry country cake, I finally remembered to make it when said friend of a friend's birthday came around. It was then that I learned that it's more of a Southern treat, and one that people definitely have strong feelings about. Some recipes call for a meringue frosting, some for buttercream, and some even for cream cheese frosting which, of course, became my choice. The coconut flavor is attributed to either coconut milk in the cake, or cream of coconut. I had never even heard of cream of coconut, but it can be found in the mixer aisle of the supermarket as it's the base for pina coladas. I'll have to try another recipe that relies on coconut milk another time as I'm not sure the coconut flavor was distinct enough for my liking using the cream of coconut. 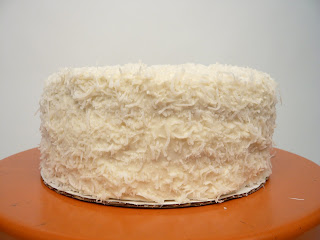 With my luck, it ended up that after making this gorgeous three layer cake, I find out that the birthday boy was in London and not returning for well over a week. That was a slight disappointment, because he completely deserves a nice gesture, but it was definitely a good excuse to finally try to make -- and eat -- this kind of cake. (Obviously, we weren't going to let all my hard work go to waste.) Now, it still isn't a favorite of mine (and we all know I do love cake), but it's not a bad concoction at all -- some people were actually extremely fond of it, including people who don't normally like coconut cake at all. Cream cheese frosting -- it unites us all.

Using clean dry beaters, beat egg whites with pinch of salt in another large bowl until stiff but not dry. Fold beaten egg whites into batter.

Beat cream cheese and butter in large bowl until smooth. Beat in powdered sugar, then cream of coconut and both extracts. Chill until firm enough to spread, about 30 minutes.
No comments: