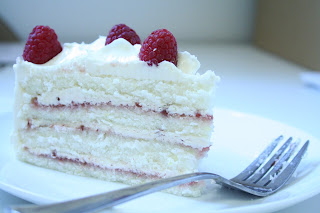 I, like many Tuesdays With Dorie bakers, am the resident baker at work. I unload treats onto my coworkers weekly (sometimes twice or three times a week, depending on the events of the weekend) to declarations of both love and hate. Love, because who isn't enraptured by a soft, warm cookie or bite of salted caramel-laced chocolate cake? Hate, because I feed their addiction to sweets and treats that may just end up on their hips and thighs without a little self-control. I am both their doting grandmother and drug pusher.

It didn't start out this way because Gelson's or Bristol Farms used to be the office go-to, but it has become assumed that I will bake something for everyone's birthday in the office/immediate store. Not that I dislike this role at all, even though since we've moved our offices to the rear of not one, but two stores with a larger sales staff than before so my baking pool has nearly doubled. I take great pride in paying attention and being able to recollect someone's favorite dessert, so when the occasion arises to demonstrate that, yes, I care enough to make exactly what you love on the one day of the year that you can claim as your own without any protest from others, I am excited for the task.

Now Rachel -- she's grossed out by fruit. Don't even think about coming near her with an orange. Milk chocolate? Perfect. Milk chocolate and caramel? Heaven.

Sarin -- happiness is yellow butter cake with milk chocolate frosting, just like they do it at the supermarket!

Most of these Tuesday's With Dorie bakers will feel the same way, I'm sure, and I by no means think I am the only fairy godmother of baking. There's just something about homemade baked goods that create a warmth inside of people and the satisfaction we get from being somewhat responsible for that virtual hug is its own wonderful feeling.

Julio's birthday was not too long ago. He likes simple cakes that aren't too sweet, but beyond that, I didn't have much to work with. He would have been perfectly happy with an unadorned pound cake or coffee cake, but as it was his birthday and he does so, so much for us everyday, a celebration cake was in order. Because Dorie's Perfect Party Cake was selected by Carol of mix, mix...stir,stir this week, my decision was made. Lemony cake with a bit of raspberry filling and fluffy frosting? For his tastes, it sounded quite perfect.

Because others had had less-than-lofty cakes, I followed Dorie's tips to a T: new can of baking powder, room temperature eggs and buttermilk, finely grated zest... Still, the cake didn't rise so high. No matter -- it was still sturdy and halved easily. I used my favorite D'arbo brand raspberry preserves even though it wasn't seedless, but it isn't at all cloying which is even more vital in my opinion. The frosting whipped together like a dream too. It was shaping up to be a pretty low stress baking assignment.

The end result was a glorious white cloud, though I omitted the coconut too. It didn't feel like it was necessary, and probably wouldn't add it again unless my frosting job was horrendous. The taste was straightforward and satisfying, but not an immediate groan-inducer. It is an undeniably pleasing cake, however, and I found myself sneaking back to the kitchen for slivers more times than I probably should have. The cake didn't have the decadence of chocolate or caramel that creates a fervor among so many people, but for others, that type of cake is much to rich. Though Perfect Party Cake may not be everyone's favorite cake, no one can refuse it either.

Except for maybe Rachel.
6 comments:

My normal baking successes/woes/queries/general musings will be interrupted with a few tales from my glorious trip to New York a few weeks ago. Blogging about meals isn't my normal cup of tea (idle Yelp account of, oh, probably two years - case in point), but I savored too many delicious bites in those five days to let them go unrecognized. This way, I'll actually be able to recollect where I enjoyed so many tasty morels and not draw a blank anytime a friend asks me where to go as I sometimes do now in LA.

I hit the ground running Saturday morning after a quick nap Saturday morning, after arriving...Saturday morning (it was a very early arrival), with brunch at Shopsin's General Store at Essex Street Market. Cousin Albert was in the midst of cramming for NYU Law finals and wasn't about to waste time trekking to Brooklyn, and Shopsin's was on the short list of my good friend, Lindsay, so that selection killed a few stones for both of us. Not a short wait by any means, but slightly shorter than anticipated, we ended up sidling up to the bar. This meant prime seating for the brother-sister-father bickering show that is essential to the Shopsin's experience. Hearing so many stories about people being thrown out of this place, and being an awful decision-maker given too many options, the ordering process became an anxiety -ridden chore. Sweat beaded in places that shouldn't be sweating as I engaged in the age-old tradition of just plain ordering. Ultimately (and without mishap), I decided on a Sneaky Pete while Albert humored his appetite with the gumbo in addition to the Jewboy sandwich. All of the dishes were fine, but I don't think any could be considered a signature dish by the establishment. We probably should have gotten the hamburger soup or mac 'n cheese pancakes, but my memory completely escaped me when confronted with the anthology of options. Our dishes were tasty, but not particularly remarkable.

Cousin Alb and I parted ways as he had to get back to his regularly scheduled programming of studying, but I wandered about, picking up a pistachio cupcake from Sugar Sweet Sunshine (of which I only ate half), a potato rosemary slice from Grandaisy in Soho, and then eventually headed uptown to meet up with my working friends. As I was already on the Upper West Side, I thought a detour to http://www.bouchonbakery.com/at the Time Warner Center was in order and picked up my first TKO and a pistachio macaron. I sound a bit like a glutton, don't I? Yes. I agree.

Dinner later that night was at a place I had been holding out for ever since reading about it on Serious Eats: JG Melon. Those pictures, along with the one accompanying their feature on the apple sour cream walnut pie shortly thereafter were embedded in my memory and I had to have them both. The dream became reality that night after a short wait in the cramped bar area. I think we were jostled between the jukebox side of the walkway to the stool side at least 25 times during our wait, but it was all worth it. We ordered the burgers medium and they were cooked to perfection -- maybe even a little more on the medium rare side which I was quite content with. The bun was so soft yet completely held up to the meat and its juices. I would liken it to a big hug around a beautiful patty of ground meat. The cottage fries were completely addicting, and even after all the sweets I had consumed that first day, I allowed myself to indulge in the pie.

Sigh. There we were. Three good friends catching up over such a great burger, delightful rounds of deep-fried potato, and a fabulously rich pie. A great end to a first night in a beloved city.
No comments: 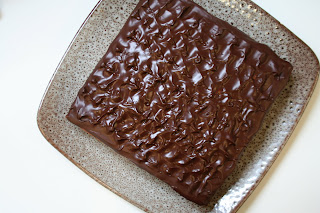 I don't know what's wrong with me.

Despite all the wonderful things that are baked in rectangular pans, there's always this feeling embedded in my being, somewhere between the vertebrae in my neck (I know, because I feel that area tense up) when I think about baked goods in 9x13 form. I have a deep affection for bread puddings, cobblers, and coffee cakes whose recipes frequently call for 9x13 pans, but in my mind, they are all improved exponentially by simply being baked in other pans. Ramekin, Bundt pan, deep dish pie plate -- all are better!

It's really an awful prejudice. I mean, why would one ever discriminate against a baking pan?? The size usually feeds more people, and it all boils down to ratios anyway -- with a little math, you could just adjust the proportions, use a different dish, and it would taste just the same. What more could you want?! It really doesn't make any sense! And I don't even have a problem with using 9x13s to bake drumsticks!

I have to make a conscious effort not to throw out recipes when the first line reads something along the lines of "Preheat oven to 350F. Lightly grease 9x13 pan." I obviously realize it's completely unreasonable to shudder at the thought of the confines of four walls, two parallel sides of the same length perpendicular to two other sides of the same length, but I honestly cannot help it. Perhaps it was being exposed to too many ugly sheet cakes in my youth, with cloyingly sweet frosting and sprinkles applied with too heavy a hand. And, comparatively, isn't there something so majestic about layer cakes? When I think "sheet cake", I am attacked by images of linoleum and formica, whereas "layer cake" brings to mind fluffy clouds and sunshine - seriously. 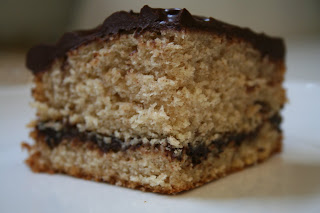 Unfortunately, the "a square is a rectangle, but a rectangle is not a square" rule applies to baked goods too, and I often find myself not quite sneering, but wrinkling my nose at square pans. That was the case this weekend when I previewed this week's Tuesdays with Dorie recipe for Cinnamon Squares, selected by Tracey of Tracey's Culinary Adventures.

It turns out, this was the perfect recipe for this weekend as I had already been working on a few baking projects and the last thing I wanted to do was wash more dishes and turn on the mixer. The recipe comes together so quickly and you get all the pleasure of a buttery cake without any beating of the butter!! It reminded me a lot of coffee cake -- with a shiny coating of chocolate frosting that I wasn't really so excited by (I'm just not one of those chocolate frosting people) -- and as coffee cake, I gave myself to go ahead to have some for breakfast! The edges were a little, shall we say...firm?, but it was perfect as you made your way towards the center. I think I'd add some excitement in the form of nutmeg and nuts next time, but it was a nice informal, yet dependable cake.

As usual, I brought it in to work for more people to help with it, and though it started off slow with only 1/4 of the cake gone by 1pm, it finished strong by being mostly devoured by 4:30. Thank goodness I momentarily got over my mild disdain for sheet cakes -- without me, those skinny, fashion types would never reach a respectable daily caloric intake! Turn your back and they'll polish off an entire cake!
5 comments: