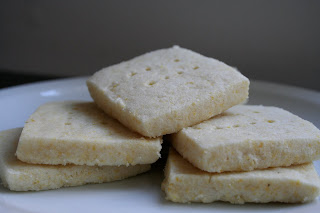 My family grew up with margarine. Imperial margarine to be specific. No -- there was one memory I have of Australian butter from a round, yellow, vintage-looking tin, but that was a very rare instance and more often than not it was a large, plastic tub with the crown emblem in the fridge. My parents were convinced that butter was devil spread (like so many other families in the 80s), so I adopted the same belief and was none the wiser probably until I started baking. Sure, there were pats of real butter wrapped in metallic foil when we went out to dinner, or at the continental breakfasts during our family trip to Europe in 4th grade, but still used sparingly lest we drop dead.

When I started this baking hobby, so many cookbooks and recipes would emphasize the importance of using real butter instead of margarine, and being such a new hand at baking, I had to get it right and pressured my parents into springing for the forbidden nectar of dairy cows. Having it around the house now, I would steal a swipe of butter for my toast instead of Imperial (and even Brummel & Brown for awhile) -- that was the beginning of the end.
/> 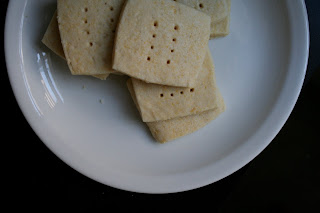 Butter enthusiasm grew exponentially and arrived at its current level during my last trip to Paris. Of course, Paris, right?? There are few populations that take their butter more seriously than the French, and if we had Pascal Beillevaire or Bordier stateside, I'm sure we'd be fanatical too.

Shortbread has always been a favorite of mine because of the gloriously pronounced flavor of butter. There may be no better way to showcase a butter than with shortbread, in fact, and this recipe that Valerie of Une Gamine dans la Cuisine chose for this week's Tuesdays with Dorie assignment, did just that. Along with the zest of a lemon and especially with the addition of cornmeal, these cookies had an amazing texture and very addictive quality. I had included rosemary polenta cookies from Frances (one of my favorite restaurants in San Francisco) in my holiday assortment so I was already familiar with the magic that ground corn can work and knew that though such a simple recipe, it had amazing possibilities. Incorporating just a handful of ingredients, make sure you use a good quality butter (I used Plugra) and it will effortlessly render the shortbread astounding -- you won't be disappointed